END_OF_DOCUMENT_TOKEN_TO_BE_REPLACED

Meet the rest of the animals: Gazelle – Walrus

END_OF_DOCUMENT_TOKEN_TO_BE_REPLACED

Since Kandoobi launched last month I’ve received quite a few emails from happy Moms detailing how much fun their children are having with the app.

This made me think of all the Dads out there and I wanted to write a post describing what Kandoobi means to a Dad.

One of my friends is a father to an adorable toddler. When I initially told him about Kandoobi his eyes lit up and he immediately downloaded the app. He told me that he could not wait to get home and share Kandoobi with his son.

The very next morning at work I had an email from my friend in my inbox … with photos! He said that his young son had a great time playing and could not get enough. “He’s happy to be able to draw on the characters. My only problem has been getting him to give up the iPad!” My friend said as a father it’s nice to have an activity that both he and his son can enjoy. “It’s definitely brought me closer to him because I let Kandoobi be our Father/Son time.”

Below are photos of his son enjoying Kandoobi! 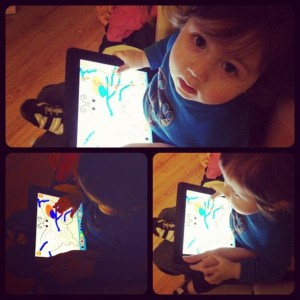 Be sure to send me your Kandoobi stories & pics and I’ll post them right here on the blog!

Send stories and photos to: Michelle@kandoobi.com

Wow, this Dad does his homework!  His thorough review of the Kandoobi – Animal Edition iPad app will surely guide parents in their app selection.

“They had a ton of animals to use and they were all created or drawn the way a child would like it.  It was presented with a cartoonish look which certainly caught the attention of our kids.  The music that was used also added to the overall pleasurable experience for all the kids involved.  It was the perfect match of harmony and playfulness that certainly kept their interest.”

Kandoobi – Animal Edition got four out of five stars and a great review on Famigo.com.

“There are a ton of activities within this app; it’s kinda like four apps in one. There’s matching, coloring, scratch & fill, and spelling games that will keep kids busy for a while. Educational value is added through the spelling and matching activities, and overall the app is very cleanly designed with bright colors and an easy user interface.”